“Once I parachuted from 15,000 feet. It just went on and on and on. I was in free-fall for over a minute and even had time to think about what to have for dinner that day. Snocross is much more intense. Competing and trying to be the best rider! But I also love dancing: performing, competing in battles and stuff like that. I get a real adrenaline kick when I dance,” grins Mariann Meszaros Josefsen. While Mariann may come across as a fearless adrenaline junkie (and she is), the sporty 29-year-old is actually much more down-to-earth than people might think. “I have always loved the feeling of an adrenaline rush, and especially the kick that dancing and snow-scooter riding gave me. They are two completely different kicks, and I need them both. I have yet to find one single activity that gives me the same kick. Sadly, I don’t do snocross anymore, because of dance injuries. Snocross is a very hard and expensive sport, but I still love riding a snow-scooter in the forests and open countryside. It may not be as exciting as cross-riding, but it’s still fun to go for a ride and challenge yourself, even if you’re not competing.”

The 29-year-old is originally from Lakselv in Finnmark – a trilingual municipality where Sami, Kven and Norwegian are spoken. She grew up here in a very active family, as number three of four siblings. Her parents passed their sporty lifestyle on to her. “My dad was a scooter dealer, and my mum worked at the local youth club. I used to dance a lot at the club and loved watching the older kids. I get my passion for snow-scooters from my parents. They were among the first people in Norway to get a licence to ride snocross,” says Mariann, who was 14 when she first rode a snow-scooter.

I didn’t have a typical Norwegian childhood, with long weekends spent at the family cabin.

“Since both my brothers also did snocross, we spent a lot of time together as a family. At the weekends, we would pack up the car and drive from competition to competition in Finnmark, Sweden and Finland. I was the only girl in Finnmark who did snocross, so I won a lot of competitions. They were happy days,” says Mariann. “My big brother is my idol!” she continues. “He won the Norwegian championship in the supercross branch of snocross in 2009.”

Moved to be able to dance

At the age of 17, Mariann decided to pursue a career in hip-hop. She packed her dance shoes in her suitcase and set off for the Arctic capital to study dance at Kongsbakken Upper Secondary School. “I love hip-hop, and Tromsø had a bigger dance scene than Lakselv, where I often ended up dancing alone. I was only allowed to move so far from home because my sister, who is 13 years older than me, lived in the city.” In Tromsø, Mariann also started her own dance school at the Tvibit youth culture house. It quickly became very popular and had 100 students. Mariann shared her knowledge generously, teaching almost all the classes herself. “I was dancing all the time, and after a couple of years, my body had simply had enough. It was all too much. I was suddenly bored of dancing and was completely burnt out. In the end, I handed the dance school over to some other people, moved back to Finnmark and started riding snocross again. I didn’t want to dance anymore.”

After a while, Mariann moved to Trondheim to study, but had scarcely begun her studies when she fell seriously ill. “My life simply ground to a halt! I got a disease called anti-NMDA receptor encephalitis, which causes the immune system to run amok and attacks the brain. I ended up in a sleep coma for about a month, and was on sick leave for two years. It took ages to build myself up again. I basically lost two years of my life, from the age of 23-25, which was incredibly rough. I was at a standstill and simply had to wait. At the same time, you learn a lot from this kind of experience. I think I’ve become more empathetic.” During her sick leave, Mariann had to learn to calm down. She spent much of her time sewing and making traditional Sami fringed shawls. “I love sewing and needlework. I remember my grandmother doing a lot of sewing when I was little. We had duodji [traditional Sami handicrafts] as a subject at school, but I’m mostly self-taught. I got my first sewing machine for my 13th birthday,” Mariann says.

The Finnmark girl smiles warmly when she talks about her childhood and her family. She is proud of her Sami heritage, and often shares her knowledge about Sami history, traditions and crafts. “I’m named after my grandmother, who was called Marit Anna, although I got a slightly more Norwegian name. When I was born in 1990, it wasn’t so cool to be Sami. I went to a Norwegian kindergarten, but one of the women who worked there, Sara, spoke Sami. We often spoke to each other in Sami, meaning I learned the language quite well. But once I started school, I became more Norwegianised and did not receive any teaching in Sami. Nowadays I don’t speak Sami very well anymore,” Mariann explains. She talks about how the Norwegianisation* integration policy, which the Norwegian authorities practised against the Sami, affected her family and about the shame that came with it. “Much of our family was banished to Canada. That’s rather strange to think about. My dad was also very Norwegianised, but was just young enough not to be sent away to boarding school. I’ve heard that many people consider our family as a little extra Sami, because my mother is from Hungary. The Sami genes largely originate from Central Europe, which is where Hungary is. And Sami and Hungarian are from the same family of languages.”

The Sami part of my childhood has shaped me a great deal.

“My dad has taught me a lot through his interest in scooters, food, and traditions that you don’t necessarily need the language to understand or take part in. Although language is a big part of any culture, he has tried his best to teach us the traditions that he grew up with.”

Today, Mariann is back. In Tromsø, at Tvibit, and as a dance teacher. She has trained as a child and youth worker and has many other projects under way. “I like the cultural life here in Tromsø, and the attitude up here that nothing is impossible. Especially at Tvibit, where I work. Its philosophy is that you shouldn’t be afraid to dream!” “When I was hired at Tvibit two years ago, I hadn’t fully recovered from my illness. I had memory problems and had to spend quite a lot of time getting back to my former level. Luckily, I am fairly free to shape my job myself, and it offers good opportunities to grow and develop. I’ve always had a lot of projects and stuff going on at the same time. Things are going really well now, and I probably have more energy now than when I fell ill. Perhaps, I’m trying to make up for lost time.” As part of her job, she teaches young people between the ages of 15 and 30 hip-hop and holds courses in traditional Sami handicrafts. There is a great deal of interest in the courses in duodji. “I have held courses on making fringed shawls, pewter bracelets and luhkka [traditional, short, hooded capes]. The people who take these courses are young people with a Sami background and students who want to learn more about Sami culture. Often foreign students. A lot of people want to know more about Sami traditions, while others are just curious. It’s actually very interesting to see who shows up.”

Mariann says that there has been an explosion in interest in Sami culture in recent years. She gives social media and tourism much of the credit for the sudden increase in the popularity of Sami culture. On her Instagram account, Mariann shares her eclectic interests in a wonderful medley. She says that her posts about Sami handicrafts are always well received. “Something happened back in 2008–2009, with a sudden increase in interest in all things Sami. I was one of the first people to start sharing duodji on Instagram and using Sami hashtags. Every time I publish a picture of a gákti, I get loads of likes. People seem to love it, which is brilliant. At the same time, I wish people would also like the scooter posts I share as well,” Mariann laughs. “Sami culture is very colourful, and it looks good in photos. There are also many tourists who come up to me and say things like: ‘Wow, this is so cool’, which also has a positive, snowball effect, and it seems that people think: ‘If they like it, maybe we should like it too.’”

Mariann’s favourite thing to make is gáktis [traditional Sami garment]. “I love making gáktis. I took a course five years ago and have since made several for myself, but I have told the whole family that I will make them gáktis for free, if they buy the fabric. It’s great knowing I’m helping keep a tradition alive, and making something that will actually be used. I made a summer gákti for my niece, with unicorns
on it. Needless to say, she chose the fabric herself.” Mariann explains that some liberties can be taken in terms of the fabric used to make a gákti, but that it is important to make sure they have all the right details and respect the traditions. “I’m a little bit scared of the gákti police, but it’s good that they’re out there, to make sure the traditions aren’t forgotten and lost forever.” Mariann has a plan to learn how to make men’s gáktis as well. “I’ve asked my dad if he wants one, but he says that that time is long gone. I know he’s proud of me, and he always takes a picture of me when I’m wearing a gákti. He’s proud, but that’s how it is with both Sami and Finnmark families. It’s a tough environment, and people don’t talk about their feelings much.” “I do sometimes wonder what my grandmother would have thought about me wearing a gákti, if she were still alive today. When you have been Norwegianised as much as she was, it might be difficult to accept. I suspect she might have been mortified, but I hope she would have
been proud.”

What are your dreams for the future?
“To run my own duodji business!”

*Norwegianisation was the Norwegian authorities’ policy to assimilate Samis and later also Kvens and was in force from around the mid-1800s and right up until the 1960s. Source: Store Norske Leksikon/Great Norwegian Encyclopedia

Who: Mariann Meszaros Josefsen (29)
What: Child and youth worker
Where: Lakselv and Tromsø
Instagram: @mariannjosefsen

Mountain for skiing/hiking: Buren on Kvaløya! It’s got Tromsø’s best views.
Favourite place: My home town, Lakselv! My favourite place in Tromsø is Kroken! Fantastic scenery, and amazing skiing on the downhill slopes in winter, especially when there is new powder snow! In summer, I love hiking up to Lunheimvarden. Short hike where you are rewarded with stunning views of the city.
Activity: Sledding (snowmobile), snowboard & Hip Hop.
Favourite place in the city centre: Tvibit youth culture house.
Travel essentials for a stay in Tromsø: A large shawl is useful whatever the season, like my Sami shawl.
Don’t miss: January has the most gorgeous pink skies, and in summer the orange midnight sun is amazing. 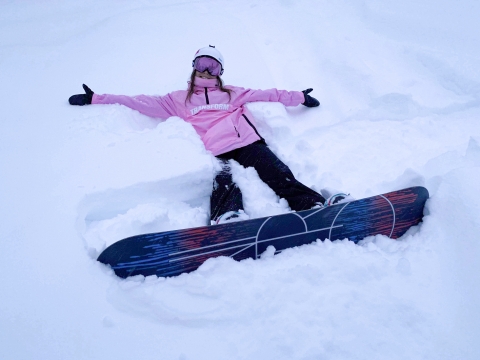 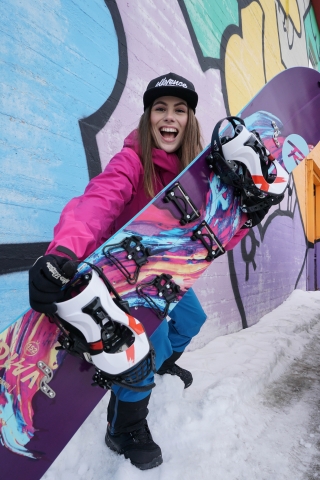